I have a tiny i686 at home with OpenBSD where I run, amongst some other things, an instance of unbound.

Last night I decided that I wanted a dashboard to collect some statistics about it.

My first thought was the ELK stack. The only problem is the ram. The little i686 has 1GB of ram, I don't know if it's enough to run logstash, let alone the whole ELK.

A simple solution would be to collect the logs elsewhere, but I'm not going to do this for various reason (lazyness being the first, followed by the fact that having statistics about my dns queries isn't that useful in my opinion, even if it's nice-to-have.)

Instead, my solution involves a bit of bash (don't hate me on this), some fifos, tmux and ttyplot.

The primarly source of inspiration is this post that I red some time ago: it's about plotting various system statistics with ttyplot.

The result is this 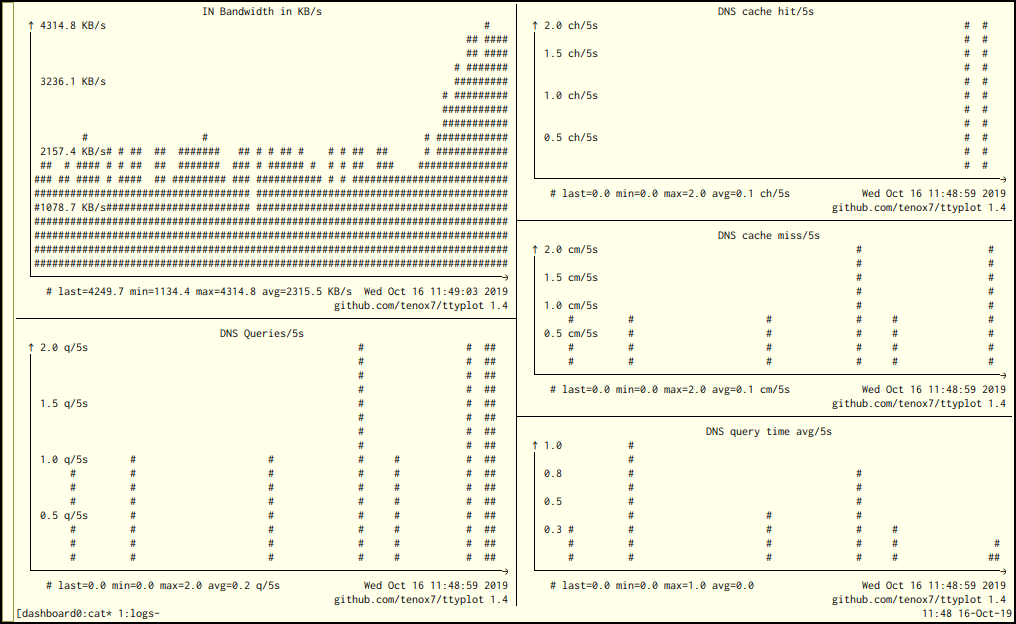 (note that I usually disable colors in xterm)

The idea is to run unbound-control stats every once in a while, multiplexing its output and draw each (interesting) stats with ttyplot in a tmux pane.

Why the fifos? Well, if I'm not wrong, every time you call unbound-control stats it will clear the statistics, so you can't run it n times to collect n different stats. And since the whole setup requires only a couple of script, the easiest way was to use some fifos.

This is the startup script. I run it on my crontab as @reboot /path/to/gen-dashboard.sh. It will create the required fifos, then spawn a tmux session and create two windows and some panes.

(A possible improvement may be to tell tmux which command to run when creating a pane instead of sending the keys to the shell, but it works neverthless.)

There's nothing special about this script, so let's move to the next.

This script also isn't interesting, all it does is pull the data out of the correct fifo and start ttyplot with the correct labels and units.

This is the (only?) interesting script. It's also the only one that requires bash, because I'm lazy, it was already installed as dependecy of something, and because of the >(cmd) construct. Rewriting the script using only pure sh(1) constructs is left as an exercise to the reader (hint: you need some extra fifo.)

The first piece collects the stat from unbound. Let's break it in pieces.

The netstat bit filters the output of netstat (the awk is copied-pasted from the previously linked post by solene@). You may want to change the ^em0 to match your network device.

This was fun. Now I have a tmux session I remotely attach with cool graphs. This doesn't cover the archiviation of the statistics tho. I think it should be trivial to add (just one more |tee -a to a local file, maybe a cronjob to do rotation, ...) but for the moment I'm happy with this result.